One of our most popular releases from our 2017 roadmap introduced Variable Payout Bands, allowing users to set different payout rates for the different call-to-actions found on our forms.

Following a successful and well adopted initial release, we’re pleased to introduce the ability to add caps (or limits) to the variable payout bands.

Having separate budgets for countries within a region is a typical scenario. The below example outlines the payout breakdown for and EMEA media plan.

Setting this up within Convertr is shown in the example below, where variable payout bands have been set for the UK, Germany, France and Spain. CPL rates and the caps per country are also included. 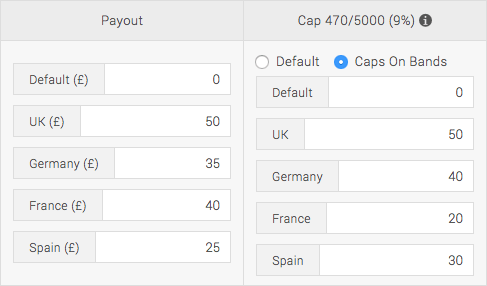 Users are now able to cater for multiple payout options and enforce delivery targets within a single campaign, as opposed to previously having to setup individual campaigns for each payout/call-to-action.

Other common use cases include different payouts and caps for states, job titles and company turnover.

For more information or support with Lead Caps on Variable Payout Bands, please reach out via support@convertrmedia.net

Our new Global Forms solution will help users regain control of their demand gen forms and fields. Previously, Convertr forms were created and managed on a campaign level. While this worked well for a time, customers voiced their struggles with th

With increased adoption and customer feedback, we have added some great new features to complement this existing functionality under the new Convertr Connect feature set. When Convertr began, one of our core goals was to improve data processes and